Put a Bow on It 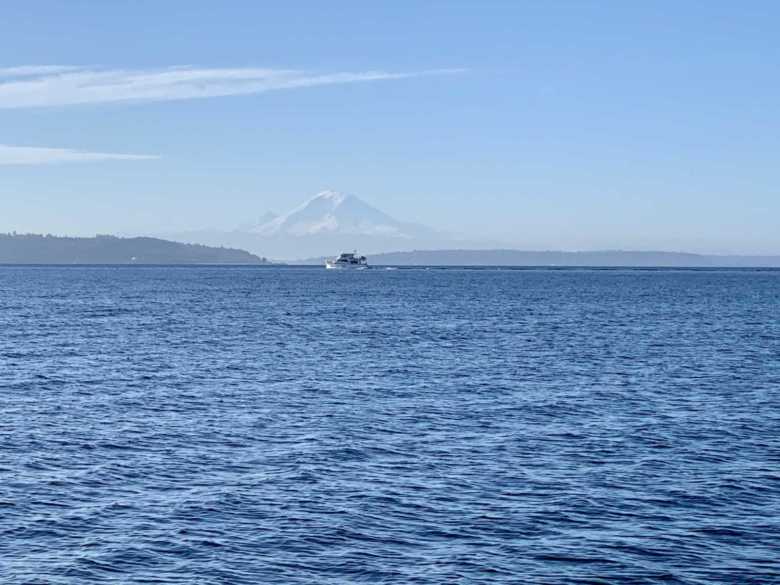 Before life drifts too far downstream, I want to take a moment to share a few more photos from our recent boat trip.

When I left you, we were hanging out on Bainbridge Island with Fiona Bean and her new owners. From there, we travelled around the south end of the Island and then north to Poulsbo, a self-styled Scandinavian village at the head of Liberty Bay.

Poulsbo gave us our first opportunity to take the Bromptons for a spin. We rode along a small road that followed the edge of Liberty Bay and returned through a series of pleasant residential neighborhoods.

Here’s Mary Anne doing her impression of Claude Rains as The Invisible Man.

Two days later, we motored north under the Agate Passage bridge, through the Port Townsend canal on the southeastern corner of Indian Island, and on to Mystery Bay on Marrowstone Island.

As we passed the Naval installation on Indian Island, we spotted a well-guarded submarine at the dock.

“Why is Mystery Bay called Mystery Bay?”, you may ask. I’m sure that there’s a real reason, but here’s mine. Because the approach is very shallow, one has to take a circutious route. Notice the shape that the course makes on the chart.

We once again off-loaded the Bromptons and took a short ride to the northern tip of Marrowstone Island to visit Fort Flagler state park. When Mary Anne taught Seattle Girls Choir, they had a summer camp here each year. The old military buildings, in various states of repair, are still used for accommodations, meetings and dining.

Then it was time to launch the PV Mary Anne (Paddle Vessel).

Just south of the marine park on Marrowstone Island lies the tiny “village” of Nordland. There’s not much there besides the general store, but what a store it is. It’s your one stop for groceries, decent wines and beers, boating supplies, tin wind-up toys and espresso drinks.

Also, the store is headquarters for the Mystery Bay Yacht Club, of which we are now proud members. Other than purchasing the burgee, there are no dues. Also, no benefits.

We found an ideal day for the long crossing of the Strait of Juan de Fuca and settled in for a couple of days on the dock at Fisherman Bay on Lopez Island.

We left Mystery Bay just after 6:00am to catch light winds and a favorable tide. We had a smooth crossing — not always the case — and beat our expected time by almost an hour thanks to a push by a three knot current.

Having crossed the Strait, we approached the southern end of San Juan Island. Who knew it was so barren?

This is a good place to see whales. Alas, we did not.

Entrance to Fisherman Bay requires care. The channel is shallow, narrow, and sometimes busy. We were met by a dozen kayaks spread across the water and two large power vessels heading out.

Lopez Island is a favorite for cycling. The roads are uncrowded, the drivers friendly and considerate, and the hills mostly gentle.

Why a photo of a drying mud puddle? I just liked the look of it. 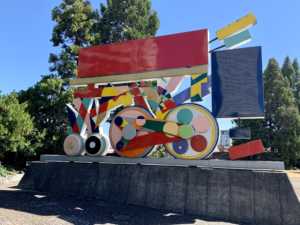